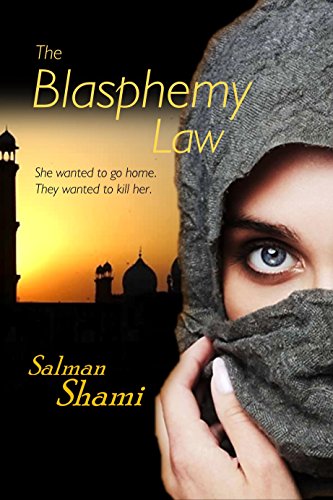 The Blasphemy Law by Salman Shami

The Blasphemy Law is set in modern-day Pakistan, a South Asian country astride the geopolitical and ideological fault-line of Asia.
With the world’s 13th most powerful military, the 6th largest nuclear arsenal, a population of 207 million, high illiteracy, grinding poverty, and burgeoning support for Islamic fundamentalism, it is a nuclear-charged powder keg waiting to explode.
Terrorist groups vie for supremacy, trying to create conditions to topple the corrupt and fractured administration.
An Australian engineer, Jane Kelly, has completed installing solar panels to electrify a remote village in Central Punjab. She unwittingly runs afoul of a powerful and ruthless feudal landowner. He uses an emerging terrorist group to frame her for blasphemy, an offence with a mandatory death penalty.
Not satisfied with Jane’s incarceration and almost certain execution, her enemies plot to kill her family and her.
Jane’s only hope lies with her two loves, Sergei and Razane, but Razane is fighting the demons from her troubled past as a Peshmerga fighter. With the feared Pakistani Intelligence breathing down their necks, they’re running out of time, options, and hope.
This unpredictable, fast-paced thriller and erotically charged love story will have you on the edge of your seat and reading late into the night.

Reading this book makes me want to be Jane, who is one of the characters in the book! I love books that are based on Middle Eastern stories and those that have elements of cultural diversity, and this book draws my interest as it has both aspects that I naturally enjoy.

The plots in the book is well thought-out and romance in the story adds sensation to the whole book!

On another note, Blasphemy and Muslims are two things that just don’t agree with each other. I love how the author daringly wrote this book which could fetch a lot of controversion. Being a feminist and someone who thinks out of the box, I wish to see more characters like the ones in this book in real life!

Get this book on Amazon https://www.amazon.com/Blasphemy-Law-Salman-Shami-ebook/dp/B077G7V97Z

Something about the author:

Salman Shami was born in Lahore, Pakistan in 1966 to a Pakistani Father and a Swiss Mother. He has written since an early age as a means of entertaining himself, family, and friends. Later he wrote junior fiction to have something to read to his own children at bedtime.
Salman has two Masters Degrees and is an Engineer by profession. A busy professional career meant little time to complete the arduous task of writing and publishing a book.
That all changed after he was physically attacked for talking about the injustices caused by blasphemy laws in Pakistan. Shaken by the incident and determined to do something about it Salman decided to go to war with unreasonable people with the only weapon he believes in, the proverbial pen. He hopes to contribute to pushing back the tide of intolerance and hate that threatens to engulf humankind. His cross-cultural background and his experiences in Pakistan shape his unique viewpoint.
Salman has been an outspoken critic of religious fanatics all his life. This has brought him many enemies, some of them powerful. To get an engineering degree in Pakistan students were required to enrol in Islamic Studies. His lecturer for that subject was the same person who co-founded Lashkar-e-Taiba with Osama Bin Laden. Salman used to confront him with questions about of the contradictions in Islam such as why it permitted slavery or why women were not allowed four husbands. His lecturer banned him from his classes. As a young and rebellious teenager, Salman did not realise just how dangerous the man was or how close he had come to being on a kill-list.

During his university years, Salman publicly backed a secular student union against a radical right-wing youth party, Jamaat Islami. In the course of elections, which the secular group won, he escaped being glassed, shot at, and was nearly kidnapped.

Salman lives in Australia with his family. When he is not writing, he travels, plays the guitar, and tinkers with his classic cars.